Ulcinj - History of The Town

We publish a text written exclusively forMontenegro.com by Marijana Vukcevic on the history and sights of Ulcinj. 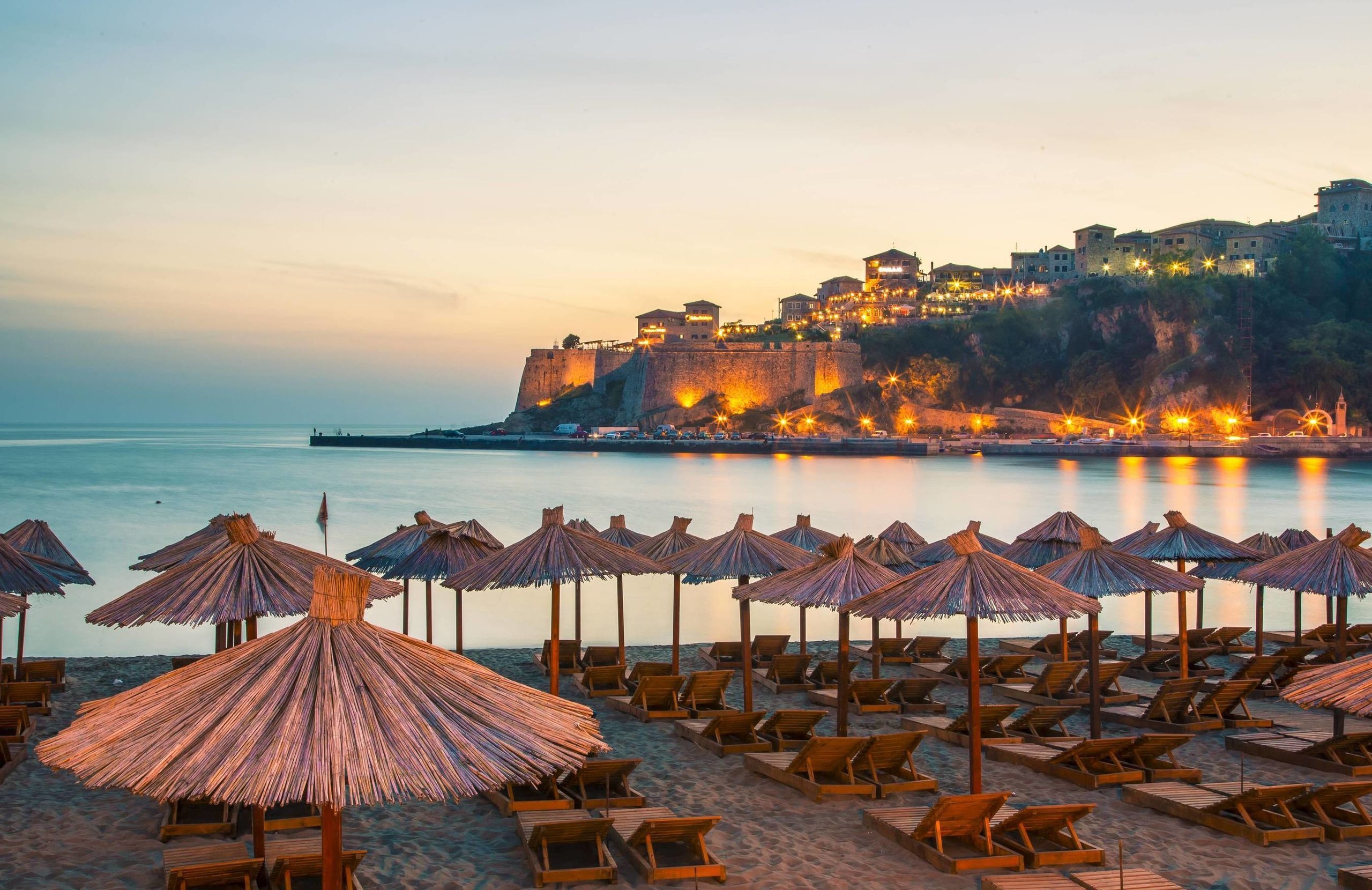 We publish a text written exclusively for Montenegro.com by Marijana Vukcevic on the history and sights of Ulcinj.

Ulcinj is one of the oldest towns on the Adriatic coast, withstanding the ravages of time for 25 centuries. Jutting up magically on the cliffs above the open sea, with its face towards Otrant it is guaranteed to captivate all your senses. Through the immense variety of cultures and civilizations that have left their mark and been absorbed into the overall picture. It is like a little paradise on earth, carved timelessly out of the centuries of bloody battles, defiance, pride, and affection of all those who have visited this place at least once in their lives.

The earliest traces take us back to prehistoric times when Ulcinj belonged to the Illyrians, a people of Indo-European origin. The old walled town of Ulcinj was founded in the 5th century BC by the Colchinians who gave it its first name of Colchinium. In the 2nd century (163 BC) it was captured by the Romans from the Illyrian tribe, the Olchiniatas and the ancient city of Colchinium became Olchinium.

Under Roman rule, Olchinium was granted special status, as a city with special privileges (oppida civium romanorum) and later as a city with independent status (Municipio). Because of its exceptional geographical position, the layout of the land, and its mild climate it has always been a target of the great conquerors of history. The walls of Ulcinj have often been demolished in wars but have also been renovated by all those who because of the exceptional beauty of this ancient town found peace as they built their fortresses and residences.

Justinian the Byzantine Emperor rebuilt the city and fortified it, as did the Nemanjic’s, the Baltic's, the Venetians, and the Turks. In 1183 the city was seized by the Serbian local ruler Stefan Nemanja and it was then that Ulcinj became one of the most important cities on the coast. Around that time the famous Tower of the Baltic's was built, and it is an interesting fact that this is where the famous reformer of the Talmud (Sabbatai Cevi) lived for a time and that it was here that he died in 1676 as Muhamed Efendi, after he had converted to Islam. Although it was never a true capital city Ulcinj was a favorite destination used by the rulers of Zeta for their residences.

Djordjije, the son of king Vukan of Zeta, and the grandson of Nemanja visited Ulcinj in 1252. In 1281 Marija, the sister of queen Jelena, a Frenchwoman by birth, and widow of Anselm de Chaurs, found refuge in the city. Until 1571 her tomb was in front of the altar of the Church of our Lady or St Mark’s. After her came Jelena, the widow of king Uros I who built the Franciscan monastery together with her sister Marija in 1278. Ulcinj was home to one more woman ruler - Jelena the widow of Emperor Dusan, who ruled over this widely known peaceful haven for former rulers and their wives. Djuradj Stracimirovic Balsic was buried there as though it was his capital city.

During the time of the Nemanjic’s and the Balsic’s money was minted in Ulcinj. One failed attempt to besiege the old city of Ulcinj is attributed to the Mongols. Having met no success at Ulcinj the Mongols laid waste to the neighboring Bishop’s town of Svac and slaughtered all the inhabitants. Historical sources say that Svac was rebuilt by Queen Jelena in the XIII century, and according to the legend written by the Justinians (1533) and the Biks (1610) Svac had as many churches as days in the year, and even today the foundations of a dozen or so can still be seen.

The Venetians put Ulcinj under their protection in 1423 and it remained under their control up until 1571 when it was attacked and laid waste and fell into the hands of the Turks. After the battle of Lapant in the Mediterranean that same year the old town of Ulcinj was host to the famous Spanish writer Miguel de Cervantes who was a captive there and who later wrote the world-famous novel "Don Quixote ". As the town was then called Cita di Dolcinio, Cervantes gave his hero of "Don Quixote" a lover Dulcinea who was named after the city where he was a captive for 5 years. To this day there is a square in Ulcinj where slaves were brought and traded known as Slaves’ Square or Cervantes Square.

After Venice and Dubrovnik Ulcinj had the third-largest fleet and was one of the favorite destinations of pirates. During this time of the growth of piracy at one point, there were 100 negroes held as slaves in Ulcinj, who on their release took the family names of the households they had served in, and so became law-abiding and respected citizens.

Ulcinj was liberated from the Turks on 11th  January 1878 but was not joined to the kingdom of Montenegro until 30.11.1880. Besides its rich cultural and historical heritage this ancient city is known for its multiethnic and multinational structure and population which throughout history has united in opposing the occupying power, especially during the second world war. There are many plaques and busts throughout the town which serve to remind one of this. Ulcinj should not just be seen, it must be truly experienced. As we admire the unique and indescribable beauty of the Ulcinj fortress whose ramparts rise up straight out of the sea, we must leave it to the walls, towers, loopholes, and gateways from the time of the Cyclops to recount their rich history. If you wish to experience the exotic flavor, the spirit of the orient, and to learn something of its history, don’t miss the Ulcinj Riviera.

Besides the Old town, today’s Ulcinj has on offer 33 km of the seashore, 18 km of which are wonderful beaches - beginning with the Velika (Large) beach which stretches a full 10 km and is known for its fine sand whose grains are 0.1 - 0.5 mm in diameter. Then there is the Mala (Little) or Town Beach located directly beneath the walls of the Old City. We must not forget too the famous beach of Valdanos, which forms part of the hotel Albatross, Liman I and II, the Women’s Beach (with its sulfur springs), the beach of the Balsic palace, etc. Right up against the Djeran peninsular, at the very beginning of the Velika beach is the marina, better known as "Porta Milena" a real jewel to behold, set deep into the land, with its numerous sheds which the local people call "Calimeri".

And finally, there is the island of Ada Bojana which was created artificially when the ship "Merito" ran aground during the XIX century at the place where the island now is, and years of deposits from the river have created this little earthly paradise. Ada is a famous tourist jewel of Montenegrin, a nudist camp with a wonderful sandy beach and unique surroundings, cleverly hidden from inquisitive eyes on two sides by the beautiful river Bojana and on the third by the clearest sea. If ever you want to spend the holiday of your dreams, dressed as Adam and Eve, Ada Bojana is definitely the right choice. We must not forget lovers of good food who will find beautiful authentic restaurants by the water with a rich assortment of fresh fish and specialties of Mediterranean cuisine. Ulcinj is one of those towns which truly has much to offer the tourist, so that everyone who visits it once, always keeps returning. Text : Marijana Vukcevic.