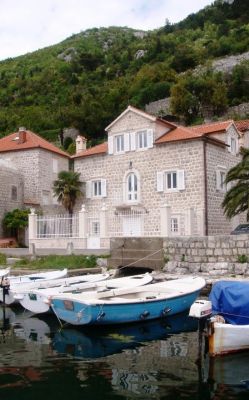 Palace Jelena is located in the Lučić-Kolović-Matikola Palace, which is situated on the waterfront, in the western part of Perast. It was built in the second half of the 18th century, which as confirmed by an inscription on the main façade dating the structure to the year 1779 and listing the names of the owners, Nikola Kolović–Matikola and his sons from the Studeni casada. It is a  three-storey, modest and harmoniously proportioned building, the a so-called “palacin” (a small palace), with a small fenced yard facing the sea.  It is easily identified by its belvedere on four sides. On the ground level, there is a simple entrance door, flanked by two windows.  The balcony on the first floor is flanked by two windows with carved stone lintels. Lučić-Kolović-MatikolaPalace  is on the list of UNESCO World Heritage Sites.
Above the inscription on the main façade stands a coat-of-arms which represents a variant of the coat-of-arms of the Studeni casada. Its field is divided into three parts. In the upper part on the right is a fire burning under the sun, while on the left is a wolf rearing to reach the sun.
Villa Jelena consists of 4 double rooms which offer panoramic views of the bay. It`s original appearance and character have been carefully restored. Each room is fitted with high-quality handmade furniture.
Standard facilities in the rooms:

If you call please mention Montenegro.com so that the owner knows which ad you are referring to.