Cetinje county spreads in the southwest part of Montenegro between the Bay of Kotor on the west and Budva Riviera, known for sandy beaches in the south, the basin of Skadar Lake, the fertile Zetko-Bjelopavlic fields in the east, and Niksic fields and White leas to the north. The area of 910 km2 is 6.6% of Montenegrin territory. It borders seven counties: Kotor, Tivat, Budva, Bar, Podgorica, Danilovgrad, and Niksic. The main road lines go in several directions: toward Podgorica (46 km), Kotor (45km and Budva 33km), and the fourth one goes over the Katun area to Grahovo and Niksic. 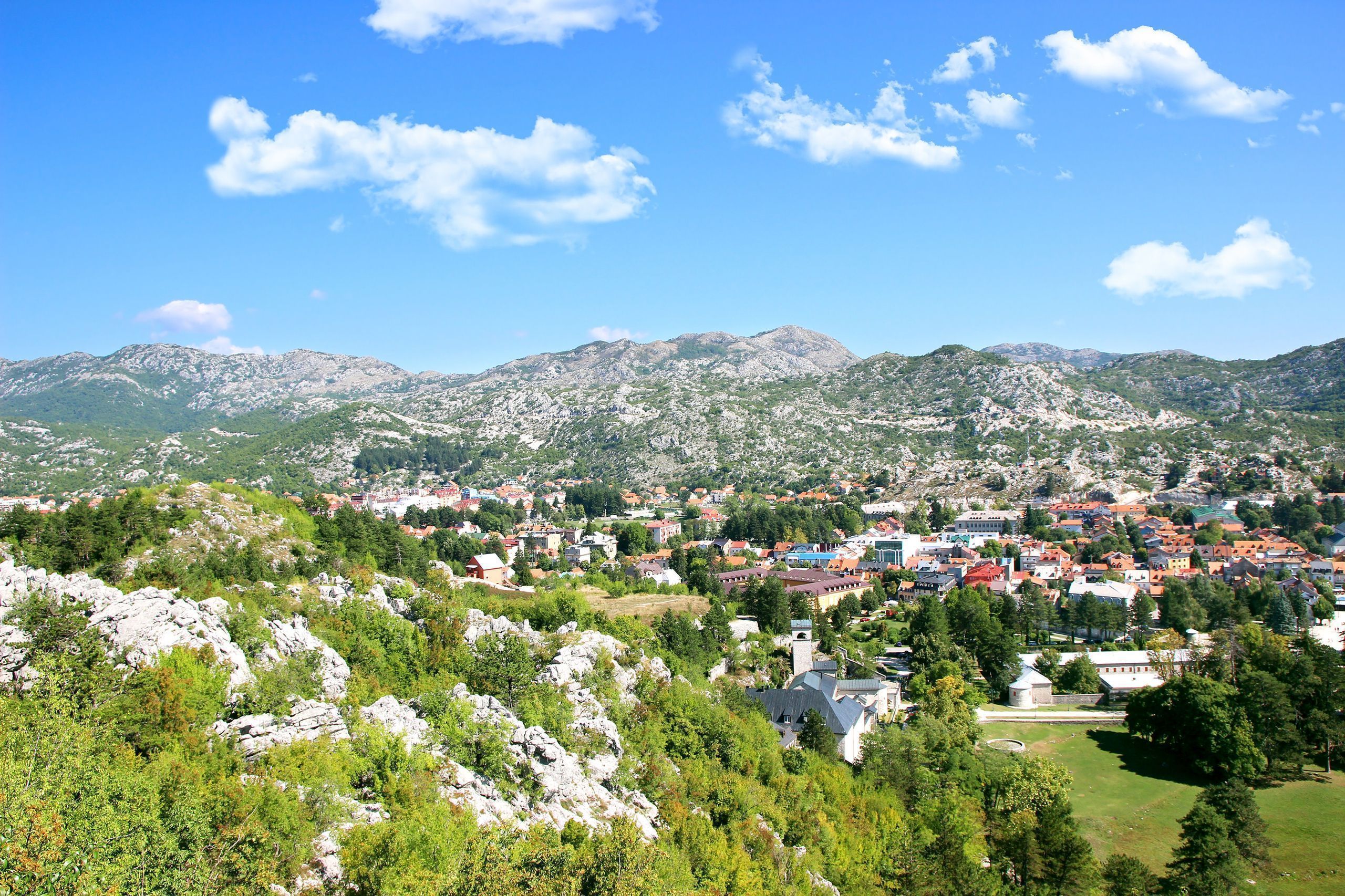 Cetinje county spreads in the southwest part of Montenegro between the Bay of Kotor on the west and Budva Riviera, known for sandy beaches in the south, the basin of Skadar Lake, the fertile Zetko-Bjelopavlic fields in the east, and Niksic fields and White leas to the north. The area of 910 km2 is 6.6% of Montenegrin territory. It borders seven counties: Kotor, Tivat, Budva, Bar, Podgorica, Danilovgrad, and Niksic. The main road lines go in several directions: toward Podgorica (46 km), Kotor (45km and Budva 33km), and the fourth one goes over the Katun area to Grahovo and Niksic.

The closest airports are in Golubovci next to Podgorica (58 km), Tivat (57 km), and Cilipi next to Dubrovnik (115 km). The most used is Podgorica airport. In terms of geomorphology, the municipality divides into three smaller areas: Katun karst surface, mountain range Lovcen and the western rim of the Skadar basin.

Katun's surface is not geomorphologically simple with the appearance of a very undulating karstified plateau, and the average height is 700-1000 m. From Katun limestone hills and ridges rise, as well as the entire mountain chains. It leaves the impression of a turbulent sea with depressions resembling the waves below and the elevations reminiscent of undulating shores. Therefore, another popular name for it is the "stone sea." The Katun area is carved out by all surface forms, chaotically arranged (scrapes, valleys, bays, karst fields), and also it is rich in underground karst phenomena (pits and caves). The most famous pit is Duboki Do (340 m) in the Njegusi field. Lipska and Cetinje (Monastery) pit also stand out next to Cetinje, and Obod pits next to Rijeka Crnojevica, from which the river of the same name erupts with a strong spring.

Of the many surfaces, diverse, deep, and specific karst forms, the most important is the Cetinje field, although it is equal to a relatively small area - only 4.5 km2. It enabled and predisposed the foundation and development of Cetinje as an urban settlement. The Lovcen mountain range area covers the western part of the municipality. Towards the sea, above Boka Bay and Budva Riviera, the Lovcen mountain descends almost vertically in many places but at the northeast and east sides, it slowly transforms into the Katun area and the Cetinje field.


Between the highest peaks of Lovcen (Stirovnik 1679 m, Jezerski peak 1166 m, Babljak 1631 m) there are deep karst depressions - coves. The deepest in the entire area are Kuk, Bizaljevac, Vuci Do, Veliki, and Mali Bostur. Some of them are even up to 200m deep.
Others are considerably more shallow such as Ivanova korita and Dolovi - the most spacious coves of the central part of the mountain. Ivanova korita (1200m) has the most economically valued importance, also Jezerski peak with the Njegos museum.

The part of the Skadar basin that belongs to the municipality of Cetinje covers mainly the southeastern part of its territory that gravitates toward Skadar Lake. According to its geological features, this area is quite different from the previous ones. This is a lower and less rocky part of the region, so it is characterized by much milder earth forms, which result in higher traffic.

Dobarsko-Gornjo Klinska cove stands out as the largest of the coves, and the famous Lipska cave is positioned right on its edge.

In the extension of this cove, but on a lower level, Crnojevica river built its rather deep and winding valley - a tributary of Skadar Lake. Lovcen National park, which occupies this area with around 2000 ha, mostly of beech forest, has a tremendous value. It forms a unique whole in phytogeographical terms, and it is a popular destination among tourists. And the fauna is scarce, especially when it comes to hunting and economically valuable species.

The birds and the fish population are the exceptions of the Crnojevica river and Skadar Lake areas. There are 150 bird species in the wetland, while the fish population has over 30 species. Besides the economical advantages of this fauna, there are solid conditions for the development of hunting and fishing tourism.

Before the Cetinje foundation, the settlement already existed on this territory. There are recorded traces of primitive people's habitats dating back to the Paleolithic era. The Koronjina cave originates from that period, and it is still an unexplored archeological site. Inside the cave, geologists discovered a large number of primitive stone tools.

Today, around Vlach church, there is a Bogumil necropolis with about 150 tombstones built into its foundations during the renovation of this building (1866.), except for two, which still lie at the churchyard entrance. According to some written scripts, Cetinje was mentioned for the first time in 1440. However, the settlement dates back to the XV century. Before the dramatic invasion of the Ottoman Empire, the center of the medieval state of Zeta moved from Zabljak (1475) to Obod near Rijeka Crnojevica, and then to Cetinje a few years later. Zeta's ruler Ivan Crnojevic established its foundations by building the castle in 1482. and two years later resurrected his famous endowment - the Cetinje monastery. He transferred the settlement of Zetska metropole from the Sain Nikola monastery then to Vranjine island in Skadar lake.

Cetinje became the secular and spiritual center of the Crnojevica state, at that time already called Montenegro. The establishment spreads between the Crnojevica river valley and Boka Bay, up to the bare Lovcen peak. From that historically significant time until the end of the II World War (until 1946.), Cetinje was the capital of Montenegro, then Podgorica took over this role.