Fortress, small squares, old churches, narrow streets, exotic vegetation – all features of the town of Herceg Novi. Situated at the very entrance to one of the most beautiful bays in the world, the Boka Kotorska (the Bay of Kotor), it abounds in historical and artistic heritage, unique and varied flora and day trip that are destinations surrounded by nature and suitable for visits all the year round due to the exceptionally mild, warm climate. The average annual air temperature in Herceg Novi is 16 degrees centigrade.

Whether you are coming from East or West, as you turn off the main highway into the center of town itself, the first thing to greet you will be the magnificent Kanli Kula fortress. It is often said that the fortress, owing to its size and position, rules over the town. It dates from the 16th century, and like most of Herceg Novi is built of stone, with thick walls and towers. Kanli Kula is known across the Adriatic as a fantastic summer theatre stage, into which it was adapted in 1966. Every summer evening Kanli Kula is the venue for all kinds of concerts, film events, and more besides. During the day visitors can tour the walls and enjoy the splendid view over the town for only €1 – the price of the entrance ticket. From here you can take the most beautiful photographs of the city and of the mouth of the Bay of Kotor. Descending the steps from Kanli Kula to the main town square, Nikola Đurković Square (previously called the Salt Square), our gaze alights on the Sahat or Sat Kula (the Clock Tower).

The old clock at the top of the tower long withstood the rigors of time, only being replaced in 1995 with a new, electric one, and has always been one of the hallmarks of Herceg Novi. Built-in 1667 during the time of Turkish rule, this tower, with steps running through it, is unusually positioned, and this fascinating structure has served as the main entrance to the town ever since it was built. The square is home to numerous cafes, banks, clothes stores, and bookshops. Nearby is also the town market, where you can buy fresh fruit and vegetables every day, mostly home-grown, as well as freshly caught fish from local fishermen.

As soon as we get to the bottom of the steps from the main square, through the Clock Tower, we come across a second Old Town square called Belavista, meaning “beautiful view”. Belavista Square is dominated by the Orthodox Church of the Holy Archangel Michael, unique for its stone iconostasis. The Old Town square is a jewel of architecture. The water fountain in the centre of the Belavista Square was recently reconstructed and is a real attraction for tourists.

You can get down to the town promenade and beaches via any number of narrow passageways and steps. One of the most interesting is the passageway from Belavista  Square through Marka Cara Street (named after the writer) and the Catholic churches of St. Jerome’s (with its rich treasure-store) and St. Leopold Mandić’s. In this street lives a veritable dinosaur among trees – a Gingko Biloba that has found its place amongst the numerous palms and seaside plant life.

This passageway will also take you to the 15th century Forte Mare fortress by way of a symbolic little bridge that connects the fortress with the Old Town. Built on a rock, it rises steeply above the shore itself, towering over the Town Beach and the harbor (the Škver). At the lower side of Forte Mare, there is a door that leads from the promenade to the top of the fortress, built into the walls themselves, and the upper door is also known as the Sea Door (Porta di mare) The Forte Mare Fortress is visible from all around and, as its name suggests, is a true sea fortress. Beginning on 1st July every year, films are shown here, turning it into an open-air cinema under the starry sky – a unique experience. It can be toured between 7 am and 7 pm every day. Tickets for individual visitors are €2 and €1 per person for group visits.

Descending to the Pet Danica Promenade, if we look towards the eastern part of town we can see the Citadela fortress. Standing in the sea itself, connected to the town center by its walls, this tower was built during the time of Venetian rule. The earthquake which struck Herceg Novi in 1979 completely demolished this fortress, the old walls of which still lie in the sea.

If you decide to head in the other direction, toward the town harbor and the open-air water polo pool, you will see the Railway Station on your right, now wonderfully renovated as a tourist facility. This was a unique railway station in view of the fact that it was built on the very shores of the sea, next to the town harbor.

Little-known is the fact that trains once ran in the Boka along the Pet Danica Promenade and that the main station was in Zelenika, a few kilometers along the coast. The railway was officially opened on 16th July 1901 when the first train arrived in Zelenika carrying high officials of the Austro-Hungarian Empire, which ruled the Bay of Kotor at the time. The railway station building in Herceg Novi was built in 1934 thanks to the much-respected mayor of the time Mirko Komnenović. It was built of stone and reconstructed and reopened in 2005.

From the terrace of the “Station”, there is a view of the small marina and lighthouse, where fishing and tourist boats and yachts moor. The Škver, as it is popularly known, is the best place to rent a craft or hop on one of the small boats that take trippers to popular spots around Herceg Novi that are most easily accessed by sea. In the summer months, when the town is very busy, Rose, Mamula and Žanjice are three not-to-be-missed destinations, offering natural beauty, historical sights and a relaxing atmosphere.

Not only is Rose a beautifully-preserved little Mediterranean village, it is also one of the oldest settlements in the region. It is mentioned as far back as the 4th century by the name of Resnium. Around Rosa, both on land and in the sea, there are some very important archaeological sites. A great many divers come here to explore underwater and to tour the old shipwrecks from times gone by that lie on the sea bed. Rosa is also home to a very well-known diving camp. Alongside the beach, where there are several restaurants, there is the old Forte Rose fortress where there is also a restaurant and tourist amenities.

The little rocky island of Lastavica on which the Mamula fortress stands is set on the sea route to Žanjice, at the very mouth of the Bay of Kotor. Although the Mamula fortress has a dark history it is an impressive sight. It is one of a series of important fortifications (together with Arza and Prevlaka) constructed by the Austro-Hungarian army in 1853 in order to defend the mouth of the bay. It was symbolically named after the Austrian general Lazar Mamula whose idea it was to raise a fortress on the island. Its remarkable architecture makes this fortress one of the most attractive in the Adriatic. The entrance to the fortress is on the north-eastern side of the island, where there is also a drawbridge. Although difficult to access, the site should not be missed, both for a tour and for some swimming in the summer months. 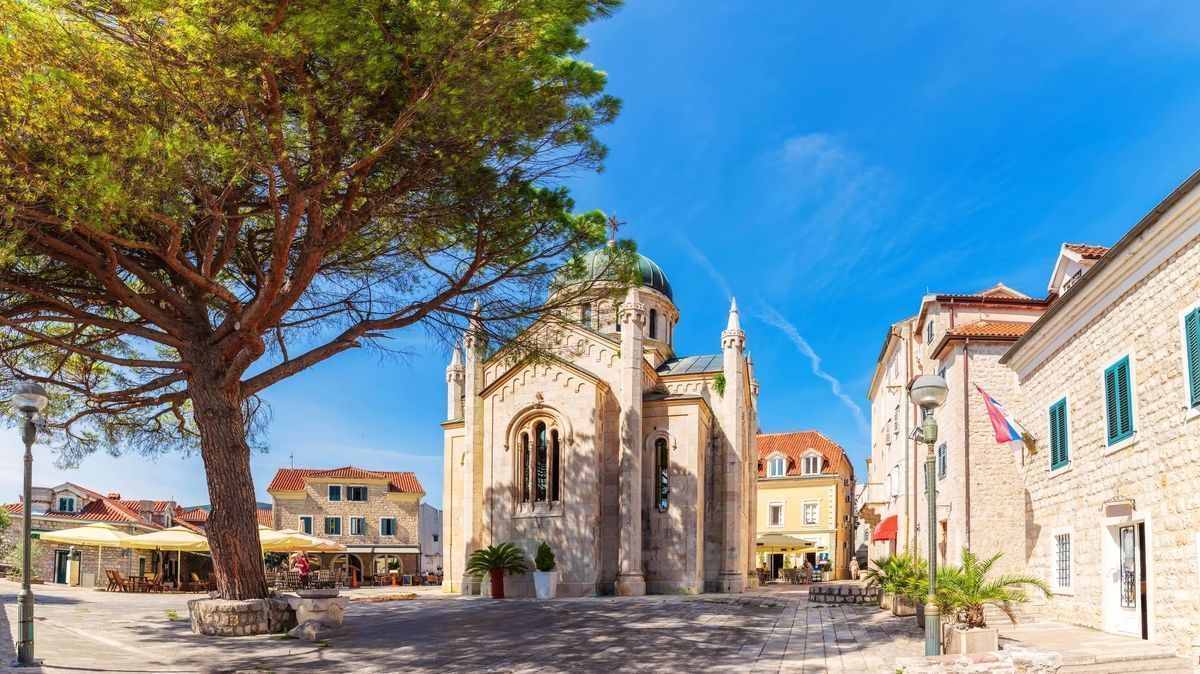 If we continue towards the open sea we will reach the Žanjić beach, one of the most popular in Montenegro. This beach is special because of its crystal clear sea, naturally white pebbled beaches and ancient olive groves growing right next to the beach. You can take a look inside the Church of St. John, dating back to 1881 and located in the olive groves just a few steps from the beach. There you can hear the interesting story about this church and the idyllic location that is Žanjice, or take a stroll through breathtaking natural surroundings to the nearby Mirišta beach.