Durmitor - ''To our east stretched a deserted valley in the karst, full of rocky debris and snow drifts, while on the other side we were greeted by the green landscape of the Lake.

Here I left Djuro who suffers from vertigo and set off to conquer the main peak in the company of a shepherd. My guide took off his shoes and walked barefoot. After an hour and a half's climb we came round the summit and stepped on to the ridge between So and Kablinova. We looked down from that dizzy height into the ravine where we had been the day before where all was glistening beside Lakes Skrcko and Malo, which looked like two dark blue eyes'', this is a quote from "First Steps in Ciro's Cave", the memoirs of Oscar Baumann, an Austrian geographer, who was the first man to climb Bobotov kuk, (2523 meters), and the highest peak in Durmitor, one of the jewels of Montenegrin nature.

In the Durmitor region, in the unbelievably deep and picturesque valleys, between the foothills of the mountain, bordered by thick undergrowth, are seventeen glacial lakes, or as the local people cal them "mountain eyes". Modro, Zminje, Vrazje, Riblje, to mention just a few, but of course the most well-known is Crno jezero (the Black lake), which is covered by ice in winter, and in July and August has a water temperature above twenty degrees Celsius.

The Durmitor National Park covers an area of 39,000 hectares, and 20,000 hectares of it, which in 1980 became part of the World Heritage, are under the protection of UNESCO. Durmitor takes in the highest town in the Balkans, Zabljak, which, at 1456 meters above sea level is surrounded by as many as twenty three peaks of more than 2300 meters. The Durmitor National Park is very interesting from the geological aspect, and it is most well-known because of the River Tara canyon, the deepest in Europe and the deepest in the world after the Grand Canyon on the Rio Grande. Apart from this the canyons of two smaller rivers, the Susica and the Komarnica are exceptionally interesting. The beautiful rich flora is made up of 1500 plant varieties, and the main attractions of the animal world are the bears and 130 species of birds of which the most impressive are the eagles. All this goes to make this mountain range exceptionally popular for so called activity holidays - hunting, fishing and mountaineering, as well as rafting on the River Tara which is steadily growing in popularity. For lovers of winter holidays, i.e. alpine and Nordic skiing, Durmitor comes up trumps, with its exceptionally beautiful and attractive ski slopes, which make Zabljak one of the main winter holiday destinations.

In the higher parts of Durmitor, as for example the area known as "Debeli namet" (Thick snowdrift) in the Velika Kalica region, there is snow all year round so that skiing is possible in the middle of Summer.

During the Summer lovers of ice can enjoy another masterpiece of nature, the "museum" of stalactites and stalagmites, a fascinating natural phenomenon known as "Ledena Pecina (Ice Cave) ", a paradise for speleologists, situated below the summit of Obla Glava at a height of 2100 meters, which can be reached relatively simply by a waymarked mountain track.

The forest on Durmitor, a place where the light plays tricks on you eyes

On Dumitor everything is seething with life and colour, beginning with this butterfly.

. the colour of the sky after a storm, and.

. these gentians in bud

Even though it is the middle of August, the snow hasn't succumbed 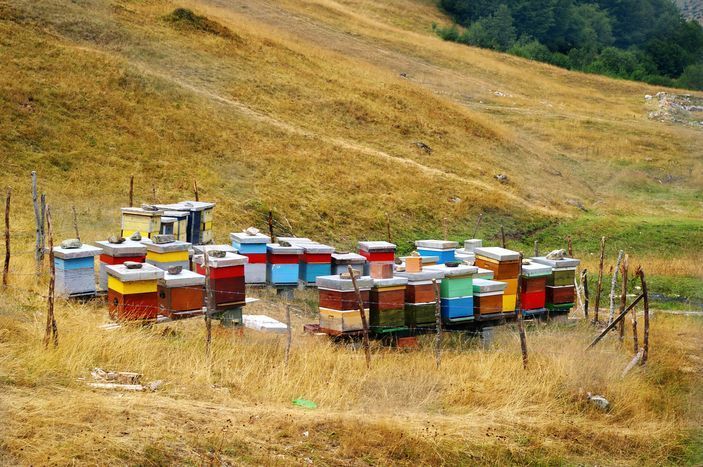 Ice cave - located at the very summit of Obla glava (Round head), with ice that never melts completely and in fact builds up every year

And this is Durmitor, fresh air and pastures (Mezdo, 1360m) 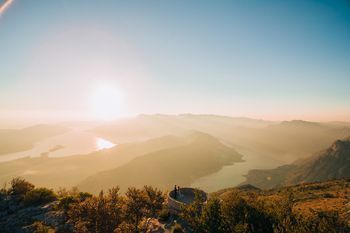 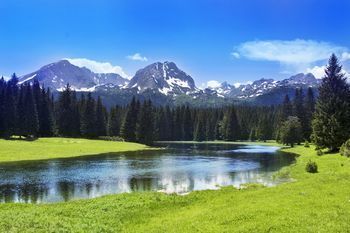 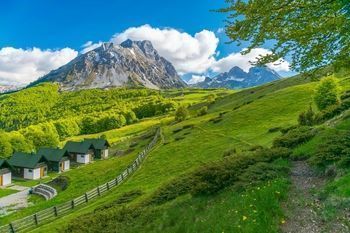