Fascinada - The Bay of Kotor is an inexhaustible treasure house of delightful traditional celebrations and national customs. Without doubt one of the most attractive is the Fascinada, an ancient custom from the Bay in honor of Our Lady of Skrpelj and the man-made island on which the grateful sailors from the Bay made a church in honor of Our Lady. 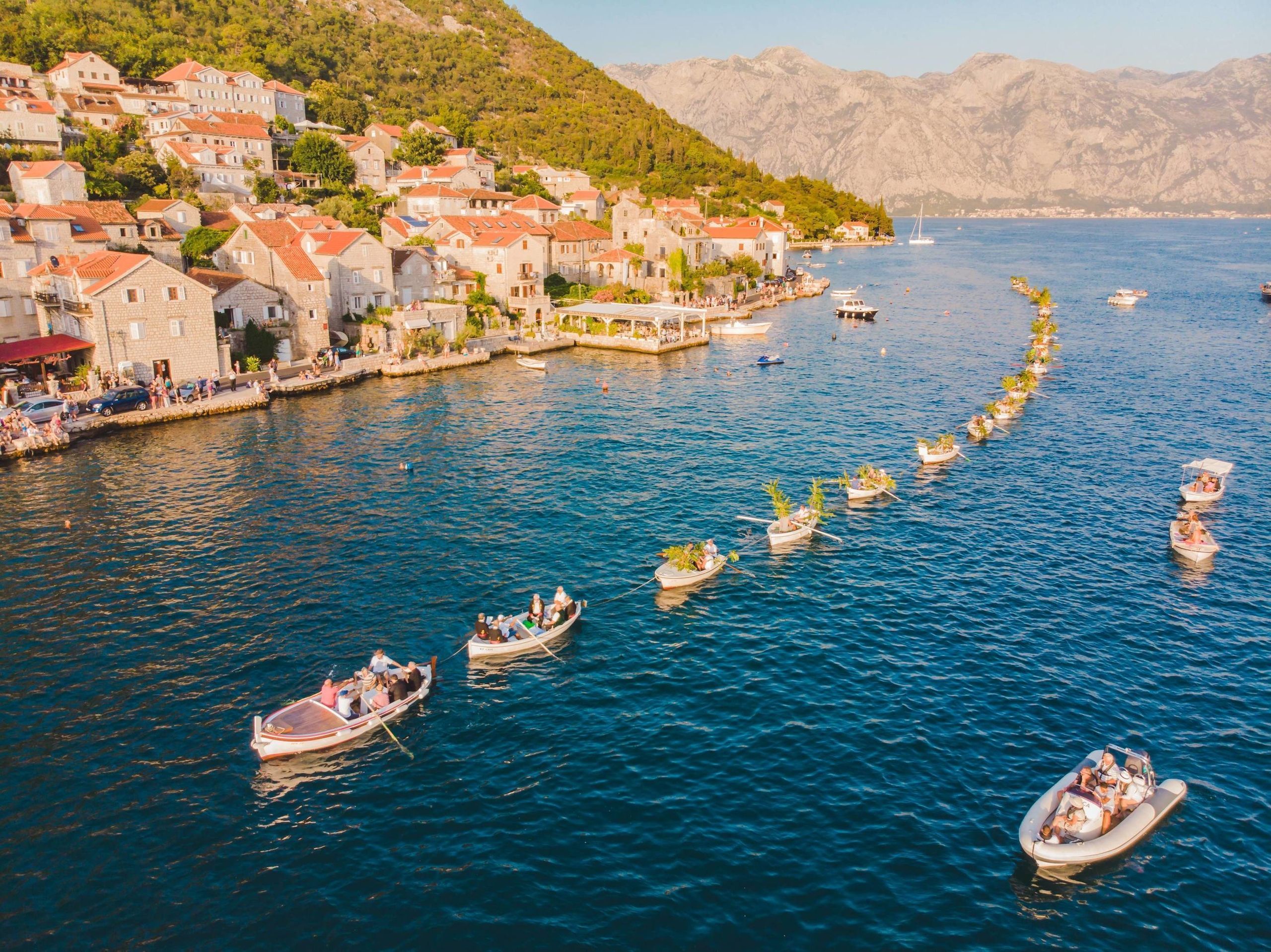 Fascinada - The Bay of Kotor is an inexhaustible treasure house of delightful traditional celebrations and national customs. Without doubt one of the most attractive is the Fascinada, an ancient custom from the Bay in honor of Our Lady of Skrpelj and the man-made island on which the grateful sailors from the Bay made a church in honor of Our Lady.

Legend states that fishermen from Perast found an icon of the Virgin and Christ (which now stands on the altar) on a rock. They decided to sink more rocks and the wrecks of old boats to make an island and on it a church which would bear the name of the icon. Since then it has been the unwritten promise of Perast sailors to drop a new rock around the island before every voyage they make, as a contribution to the stability of the foundation of the church. This is probably how the Fascinada started.

This traditional celebration got its name from the Italian word ''fascia'', meaning tape or binding, so called because the convoy of boats, decorated with poplar branches and loaded with rocks, are tied together. The boats carry only the local priest and the men, descendants of famous seafarers, and prominent citizens of Perast while the women wave to them from the shore. Every year on the 22nd of July, at the end of the day when the sun goes down, the rowing boats set out to the sound of the bugarstica

, towards the island to fulfill the vows of their ancestors and to drop more rocks around the island.

The island was made at the end of the 15th century when the original church was built, although it has since expanded as the island has grown. The church that is there today was built in 1630, and it is one of the most important cultural memorials of the Bay. The main works on the church were carried out from 1720 to 1725 when under the direction of the then well- known Ilija Katicic. An eight-sided presbytery with a cupola was made as well as a circular bell tower with horizontal wreaths and rifle holes. Part of the work was done by Petar Dubrovcanin i Vuk Kandiot. On the façade of the church is a portal with a frontispiece and a small statue of Our Lady and Christ of archaic appearance. In 1796 Antonio Kapelano from Genoa was commissioned by the town council of Perast to make a marble altar on which stands the famous icon of Our Lady of Skrpjel, by an artist of the end of the 15th century, Lovar Dobricevic. Another citizen of Perast Andrija Zmajevic commissioned the interior of the church to be painted by a representative of the Venetian school, a man from the Bay, Tripo Kokolja. On the ceiling and walls are sixty eight pictures on canvas, the ones at the very top and the top edges of the walls are scenes from the life of Our Lady, while the lower parts of the walls have scenes from the Old Testament. On the central part of the ceiling is a picture of the Ascension of Our Lady, and apart from this picture other major compositions are the Crowning of Mary and the Death of Mary.

On the ceiling are forty or more pictures bordered by a seafaring symbol - twisted gilded rope. On the side walls of the church around Kokolja's pictures there are a large number of silver plates with reliefs showing the boats of local sailors, who left these plates when they went off to sea, because it was believed that in this way Our Lady of Skrpjel would protect them wherever they were. Apart from this the church contains a large collection of archeological exhibits found from all over the Bay and a large number of items from everyday life and various handmade items, which worshippers have left as a token of thanks for answered prayers made to the patron saint of the seafarers of the Bay. As part of the Fascinada an international regatta for sailing yachts has been organized for the past two years, which completes the picture of Perast and its sailors. The Regatta is held in the straits in front of Perast, around the island up to the straits of Verige and in part of the Bay of Tivat, and is organized by the Yachting Association of Montenegro. Each 22nd July a huge number of tourists and local people from the Bay come to Perast to enjoy the area around the Town Museum and to leave its mark on this tradition of the Bay of Kotor - one of the few sea processions - the Fascinada. Nebojša Mandić