Bijela beaches are small and sandy, and there are plenty of them. A couple of centimeters under the sand in the shallow water, you can find tasty vongols and vagans clamps. In between sandy beaches are short piers, sometimes made of old stone. They serve as docs for boats. 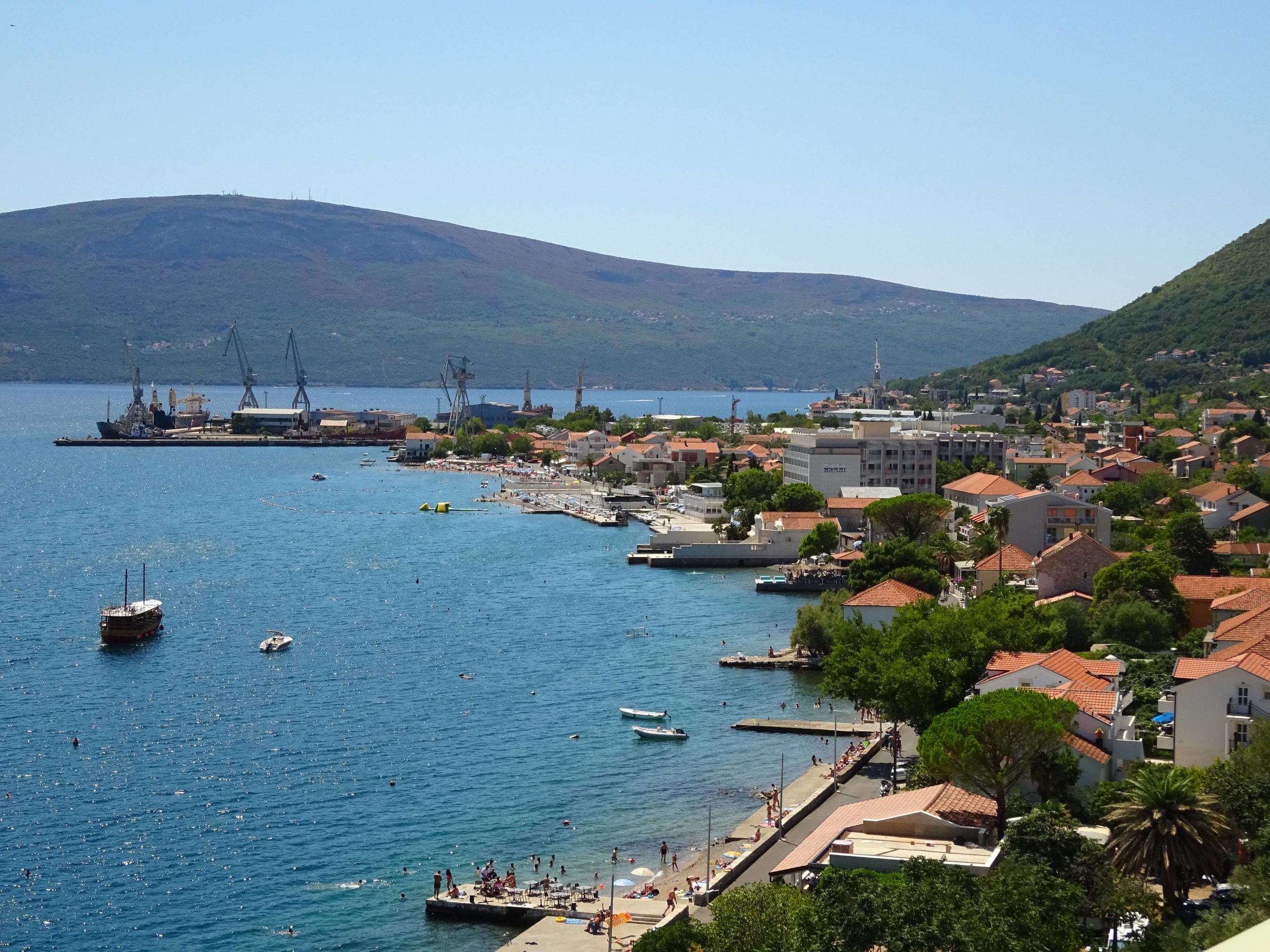 Bijela beaches are small and sandy, and there are plenty of them. A couple of centimeters under the sand in the shallow water, you can find tasty vongols and vagans clamps. In between sandy beaches are short piers, sometimes made of old stone. They serve as docs for boats.

This place is perfect for families with kids. There are many cafes along the shore under the shade of pine trees, only a few steps from the sand. Parents can enjoy cappuccinos while observing their kids playing in the sand and shallow waters.

In the summertime, a couple of hundred meters from the shore, many speed boats and cruise liners as 13 stories tall pass this place on their way to Kotor.

Their magnificent shining boat reflections attract the attention of everyone on the shore. Those who never managed to take photos with the cruiser in the background upon its arrival have a chance to do it again the next day. Before leaving, on their way out, these floating mountains stop by Herceg Novi main dock and then slowly exit the bay.

From the Bijela seaside village, there are many beautiful places right up the hill. Some picturesque rural stops are Vale, Balabušica, Zlokovica, Zadvorine, and Kalimoža. We are not talking about hiking but walking. However, this route is not suitable for the kids. To get to the parish church, you may also use your vehicle.

The Arcadian peace of the Hamlet of Vala mentions the church from 1824. At this place, a semicircular apse with frescoes from the 12th century has been discovered and preserved. These artifacts are invaluable.

The church has a collection of the oldest printed texts in Montenegro (from the first Balkan printing house, the ruling family Crnojevic of Cetinje, from 1494.) and is under exceptional surveillance. Carefully preserved in Bijela is one of only four printed copies of "Oktoih" as well as an old Liturgist and a valuable Festive Minei. A large forest surrounds the church, and if you walk deeper into the woods, under the chestnut trees, you will come to the Church of St. Vraceva was built at the gate of the church of Riza Sv. The Virgin.

The Church of St. Ladies, from the 14th century, was built on the nearby Velje hill.

Upon the Klin hill, the Church of St. Peter from the 18th century used to be visible from almost every part of Bijela. The church was destroyed in the 1979 earthquake.

And from this position, the views expand over the entire seaside village, all the way to the farthest shores of Tivat Riviera.

Until the arrival of the Ottoman empire in 1483, Bijela had possession of Nemanjic, the Bosnian king Tvrtko, the ruler Nikola Altomanic, Sandalj Hranic, and Herceg Stefan. Since the rule of the Venetian Republic in 1420., the name Bianca, locally known as Bijela, has been used for this place.

Some legends say that the town was once an ancient city surrounded by stone walls. Archeological findings confirm that there must have been a monastery on the Raka site in Bijela in the 9th or 10th century during the "Singular Christianity" period. Kotor regulation Statute from 1334. often mentions the name of Saint Peter (Sancti Petri). Nemanjic ruled Bijela during this period.

In 1351. and 1355., the place is mentioned under the name of Saint Peter (Sancti Petri) and in the brevet of Serbian ruler Dusan. Many speculate that the name given during that period is after the benedictine monastery, Saint Peter, before the alienation of the church. The monastery was destroyed during the Mongolian invasion in 1242.

After the Kosovo Battle in 1389, the Bijela population consisted of seven family tribes. In 1696. Bijela has twenty families and 104 residents. In the year 1704. twenty-two families live in Bijela, etc.

One of the first National Schools with classes held in the Serbian language was established in 1813. in Montenegro.

At that time, the teachers and learning institutions did not get financing from the local government. They got funding from the sailors, shipowners, and commoners, like olive orchard growers and vineyard owners.


Once upon a time, Bijela had fish processing facilities. Interesting fact: the fish is not cooked before the canning, like today, but it is rather fried first! The taste of that fish, some say, was magnificent. At the place of the old fish factory, the locals built the "Dolphin" hotel. Before the II World War, Bijela had: four pianos, two accordions, six cameras, six turntables, six radios, five telephones, one hundred and sixty men's and sixty women's hats, sixteen fishing boats, eighty bicycles, six motorcycles, two cars, etc.

After the extensive autumn rainy days, in the middle of Bjela runs the Pijavica creek. The asphalt road that follows the creek upstream leads to the parish church. A five-minute walk, at the end of the goat trail, is the Pijavica spring. The cold drinking water springs from the stone even in the middle of August.

A sip of the fresh Pijavica water will be a nice reward for every summer guest who decides to visit Bijela and criss-cross from the salty sea to the sweet spring!