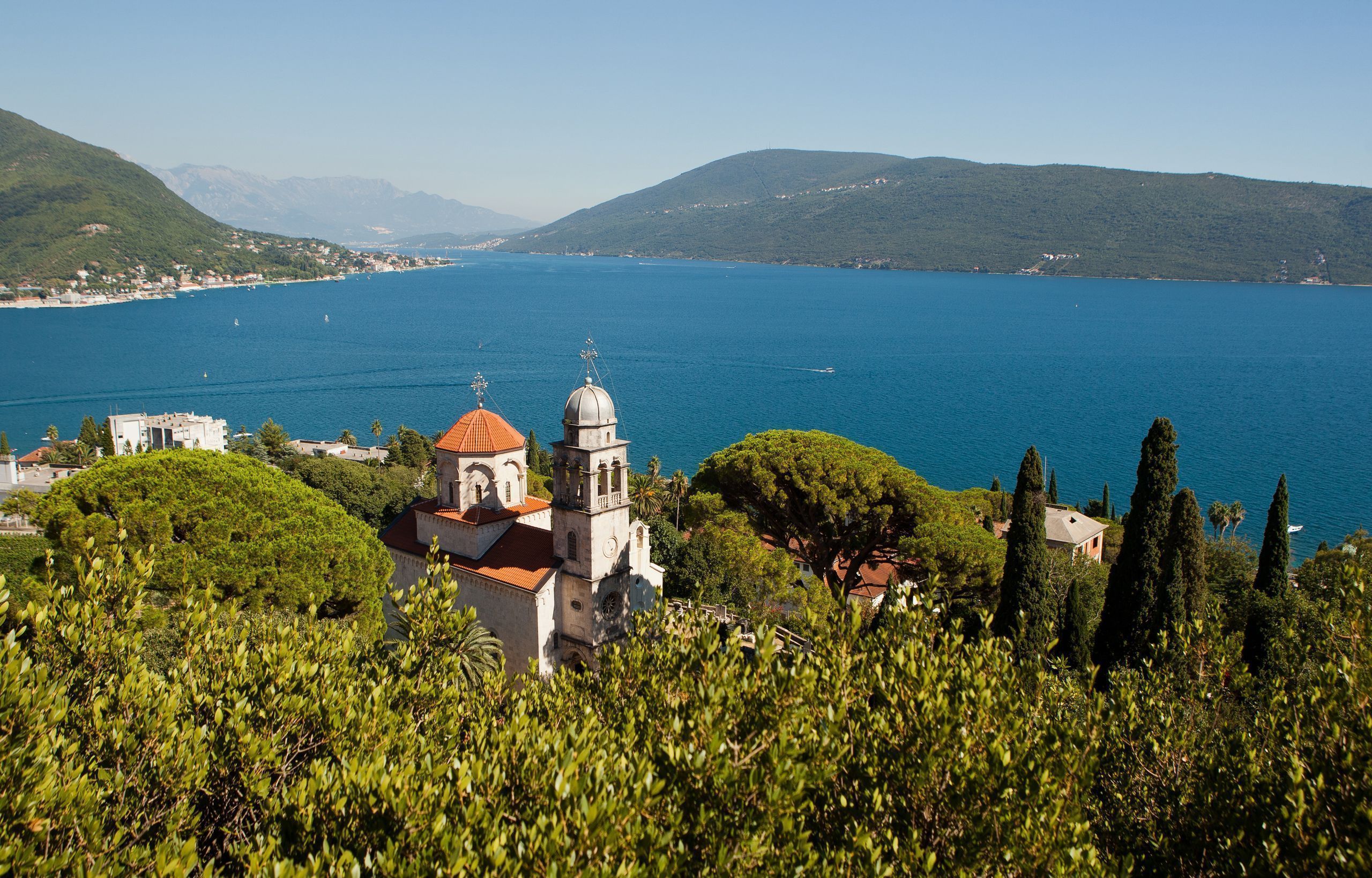 Positioned at the entrance of Boka Kotorska bay, it is not only conveniently positioned for trade, but it is also the youngest of all the old towns on the coast here. Herceg Novi has been known by several other names throughout history including St. Stefan and Novi (New), and then, in the 15th century, Stjepan Vukšić added his title, Herceg, to the name, giving us Herceg Novi.

Herceg Novi - Boka Kotorska Bay Herceg Novi was an object of desire from its founding. It was conquered and damaged by the Turks in 1482, 1493 and 1508, and was under Spanish rule for a time in 1538. In 1539, Admiral Hajrudin Barbarosa of the Turkish Maritime fleet regained control over the town after a short altercation with the Spaniards. Turkey ruled again until 1687—from then until 1797, the town was ruled by the Venetian Republic. After the fall of Venetian rule, Herceg Novi saw several more rulers, including the Austrians from 1797-1806, the Russians until 1807, and the French until 1814, though the town was under the administration of Boka Kotorska Bay and Montenegro for a time in 1813.

In 1814, Austria regained control of the town and remained so until 1918 when the First World War left Herceg Novi under the control of Italy and Germany. The town remained under the control of these two countries until after the Second World War. From the sea, the view of Herceg Novi is breathtaking. A tradition of importing seeds, exotic plants, trees, and fruits from around the world has transformed Herceg Novi into a veritable botanic garden, carefully tended and expanded over centuries. Built on a series of terraces, this Town Garden is positioned perfectly, with a view of the open sea and two peninsulas, Luštica and Prevlaka.

The sea traffic in front of the town is always very busy, regattas with local and foreign yachts, anglers catching fish for the morning market, tourist boats sailing towards popular holiday resorts—Žanjice, Mamula Island, Plava špilja (Blue Cave) and many others. Cruisers, mega yachts, and both restored and remade ships provide additional viewing pleasures for those enjoying a coffee in one of the numerous cafés with a view of the open sea. The town harbor, Škver (meaning shipyard), is also the town center.  To the right (towards Igalo) and the left (all the way to Meljine) of this marine center runs the longest promenade in Boka Kotorska Bay. The promenade is a favorite amongst tourists for the wonderful aroma coming from the sea as well as for its numerous plants, trees, and flowers. Some of the plants on the promenade are so rare that many biologists visit Herceg Novi for the chance to see several types of palm trees, cactuses, banana trees, magnolias, mimosas, authentic citrus trees, camellias, oleanders, hedges, and eucalyptus that grow few other places, if anywhere else in the world.

Herceg Novi has two town squares, including the small, stone-paved Belavista (nice view), which is easy to get to from the main town square, Trg Nikole Đurkovića, once referred to as Salt Square, by walking up the stairs that lead through the town’s clock tower. Here, old stone buildings encircle the delightful church St. Arhangel Mihailo, a building unique in its architecture. This Orthodox Church is neo-Byzantine styled with Gothic and Romanesque details. But it is not only the church that is surrounded by old buildings. Other institutions, including the archive, library, radio station, art gallery, pharmacy, cafes, and private condominiums are surrounded by historical buildings. From the square, stairways spread out leading in all directions. To the east, the stairs lead to St. Jerome’s Tower, church, and treasury, and only a few steps lower is the church of St. Leopold, who born and raised in the town. Nearby, under the shade of an ancient Gingko Biloba tree, is an old stone palace that is today the Elementary Music School.

Here, the stairways act as streets, and here at the school, this stairway street bears the name of Serbian poet Marko Car, and with good reason. Herceg Novi is also known as the Town of Writers. The list of famous writers for whom Herceg Novi was a muse is a long one, and includes Aleksa Šantic, Simo Matavulj, Ivo Andrić (Noble prize for literature), Mihajlo Lalić, Stevan Raičković, Dušan Kostić and Zuko Džumhur. Andrić’s house is today the Writer's Club and the Town Museum lies just a few houses away. Even today, one can meet writers in Salt Bookstore on the main square. Writers have always been fascinated with Herceg Novi and this love for the town grows with each new generation. Perhaps it is the dominating blues and greens of this sea-landscape that brings tranquility and inspiration.

Njegoševa, the main street, stretches from Trg Nikole Đurkovića all the way to Igalo. Along this road, you will find the most exclusive boutiques, town café, the park, post office, tourism agencies, churches, and the Town Hall. Just as Belavista is the Herceg Novi’s cultural center, Njegoševa Street is the town’s administration center. In Topla (once a separate village, but now a district of Herceg Novi), is the Church of Sv. Vaznesenja Hristovog. Petar Petrović Njegoš II, the ruler of Montenegro, learned to read and write in this church. Nearby, you will also find the Church of Sv. Đorđe, built during the Venetian rule. Herceg Novi is the largest town in the Gulf. The town is crisscrossed with numerous steps and stairways and is carefully planned with lush greenery to provide shade—making it a haven for both locals and tourists. The town hosts a large summer tradition—the oldest summer music festival in Montenegro, Muzičke skale, or Musical Stairs. Each July, on an open stage inside the Kanli Kula fortress, singers from the former Yugoslav Republics compete for prestigious music awards.

When in Herceg Novi, a must-visit is the Orthodox Monastery of Savina, a monument not only to religion but also to beauty. Located in the Savinska Dubrava Grove, this monastery features unique Mediterranean vegetation and provides a breathtaking view of the Bay. The monastery complex includes three churches—two large churches dedicated to the Assumption of the Virgin from the 11th century and the 18th century, as well as the Church of St. Sava Serbian, located uphill from the main monastery.  If you are seeking a place where you can walk for miles and wander for hours, Herceg Novi is the ideal destination. The UpTown complex at Španjola Fort is a distance away but is the best-preserved piece of fortification in the town. Its base is square and it has a massive tower and two gates. For mountaineers and hiking lovers, the Subra Mountaineering Association is at your service. 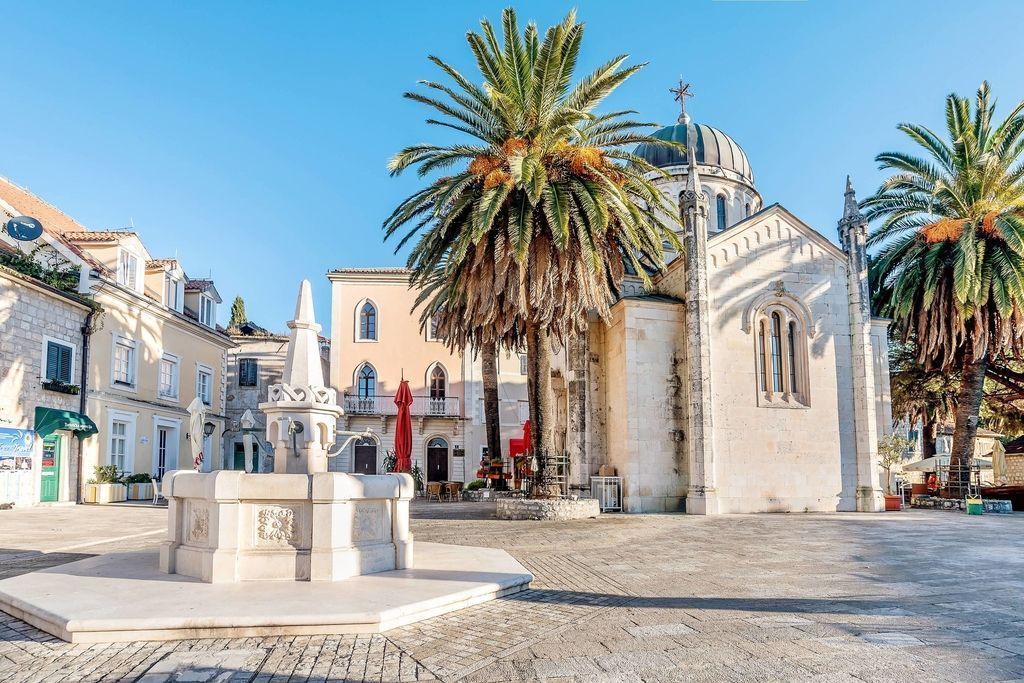 Nearby, towering over the town beach and the Skver harbor is the Forte Mare (Sea Fort) and it is the town’s most notable fortification. Another short distance away is the Cineplex cinema, Aurora—it is the home of famous Montenegrin painter Vojo Stanić, houses the swimming pool for the Jadran water polo team, and also features good restaurants. When you’re done with your trip up and down Herceg Novi, you may have time for a little comparison, done by both locals and tourists. Kotor is known for being the prettiest town in Boka Kotorska Bay for some, but for others, it’s Herceg Novi. Although both are unique and full of history, there is one main difference. Kotor is styled primarily in the Baroque style with stone palaces while Herceg Novi is strewn with large family villas. And Herceg Novi provides a tranquil release dominated by the blues and greens of the sky, sea, and land. * (For more reading about Herceg Novi lookup: Rose, Luštica, Igalo, Meljine, Zelenika, Herceg Novi – culture and tourism, Herceg Novi – wonderful vegetation.)   Hotels in Montenegro Hotels in Herceg Novi