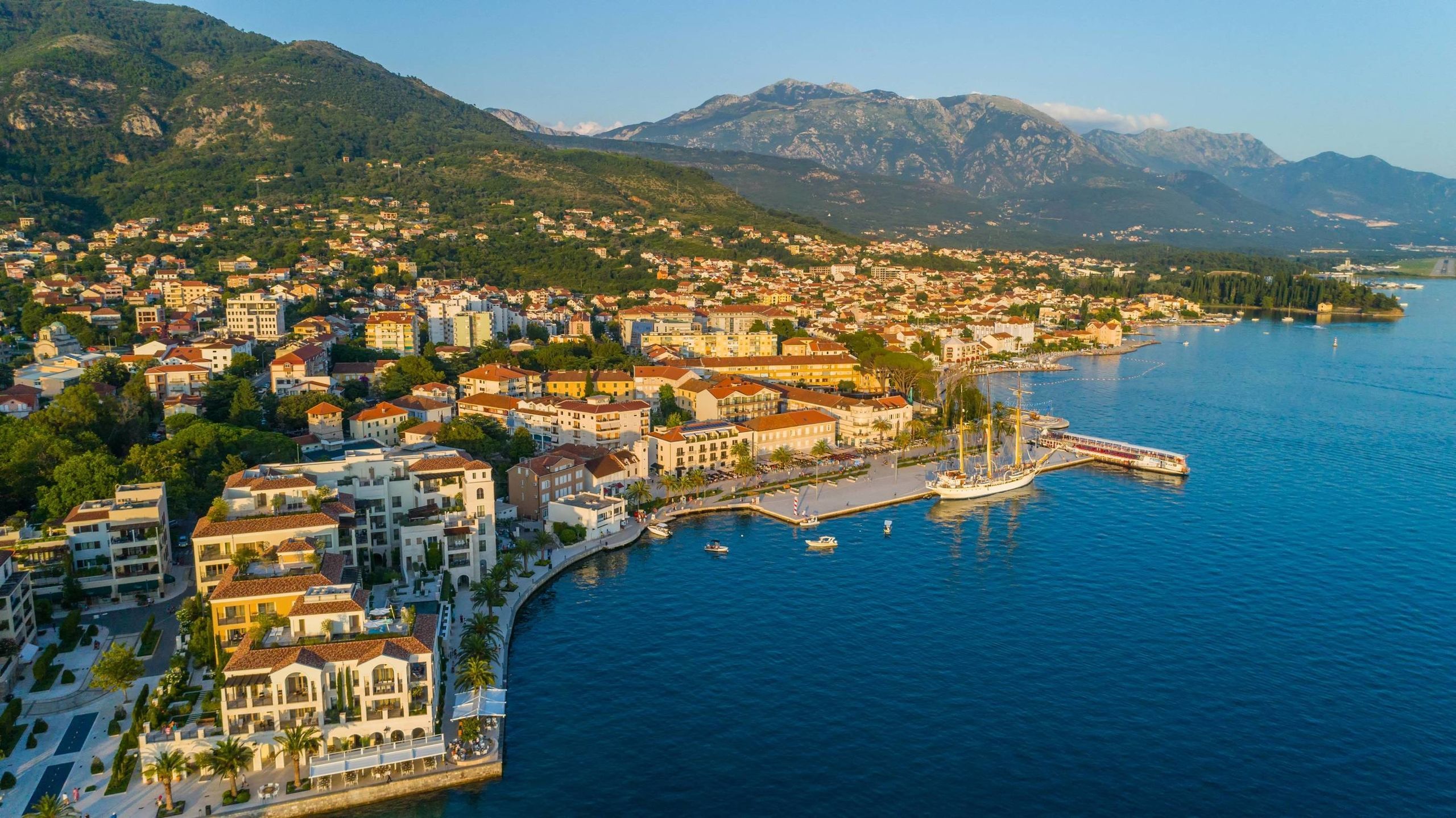 Although Tivat became a town fairly late in history, it has always been viewed as a pleasant place to visit and vacation, especially during the hot summer months. The tradition of building summer residences at Tivat began with the Illyrian Queen Teuta and continued with noble families from Kotor. Rumor has it that Tivat’s name is derived from the Illyrian Queen but it is more likely that the name comes from Theudo, short Theos doors, or God’s gift. And what an accurate description—Tivat is a beautiful gift to locals and to tourists.

Teuta’s summer residence is long gone but the summer palace, Buca, built-in 1548, is a reminder of patrician villas that once stood here. Today, Buca houses the local Cultural center and the Tivatsko cultural let, a celebration that features local and regional theaters, and players act on an open stage.

Tivat Bay is the widest of the inner bays inside the Gulf of Kotor. Three islands form an archipelago in this bay— Miholjska prevlaka (known by its tourist name Ostrvo cvijeća), Sveti Marko, and Gospa od Milosti. Rich with historic stories and events this archipelago was once a religious center and the first bishopric of Zeta was founded here by the Serbian Sveti Sava in 1219.

Tivat was also a prize to be won in the middle ages. Home to the Soliotsko polje, or salt fields, this area was guarded for centuries by the descendants of the Serbian Nimanjić dynasty – Balšići, Lazarevići, and Crnojevići. Later, the area was claimed by Kotor, Dubrovnik, Venetians, and eventually the Turks. The area is no longer manufacturing salt here and because the warm shallow waters provide little relief from a hot summer day, it remains mostly deserted, except for those locals who believe the salty muds provide relief for rheumatoid arthritis.

Tivat, like other towns on the inside of the bay, does not have a view of the open sea. However, to its merit, the town is close to the popular holiday resort at  Radovići and the beautiful sandy coves of the Luštica peninsula. But there’s no need to travel far from Tivat to reach a sandy beach—there is one only a kilometer from the airport at Kalardovo Cove.
Kalardovo beach stretches along the airport fence. The beach is neither long nor deep and the shallow waters are very warm and ideal for small children and babies, especially since you can walk a couple of meters out into the water and still not be knee-deep in it. Another attraction of this beach for some is that you can watch planes take off while you relax or swim. However, this beach can be quite noisy as the planes lift off a few hundred meters above the beach.

Tivat has a long history stretching back to its first settlers in the Bronze Age. Archaeologists have found mosaics from this period on the Sv. Arhangela Mihaila peninsula. The history of this area is followed by the history of Kotor.
For a long time, Tivat was a pastoral area with fertile plains and a favorable climate for growing wine and fruit, but it also became a manufacturing and prospecting town in the 19th century, when Austria built its naval arsenal. This small town played a significant role in the 20th-century history of Boka Kotorska Bay because of its position in the Gulf of Kotor. In 1918, it played a role in the rebellion of the Boka sailors, and in April 1941, during the Second World War, naval officers Milan Spasić and Sergej Mašara became national heroes when they blew themselves up in the Zagreb ship in order to avoid capture by the fascists.

After the war, the arsenal became the naval shipyard. Today, it is a construction site transforming the shipyard into Porto Montenegro, the biggest marina for yachts on this part of the Adriatic. Near the airport, a large golf course is being built, signaling a new resort era for the town.
When visiting other areas in the region, Tivat is an excellent starting point. Kotor is only a 10 minute drive through the Vrmac tunnel, the villages of Gornja Lastva and Herceg Novi are only 19km by ferry and Budva is only 24km. However, it is Miholjska prevlaka and the Lustica peninsula that are closest to Tivat, both within walking distance. 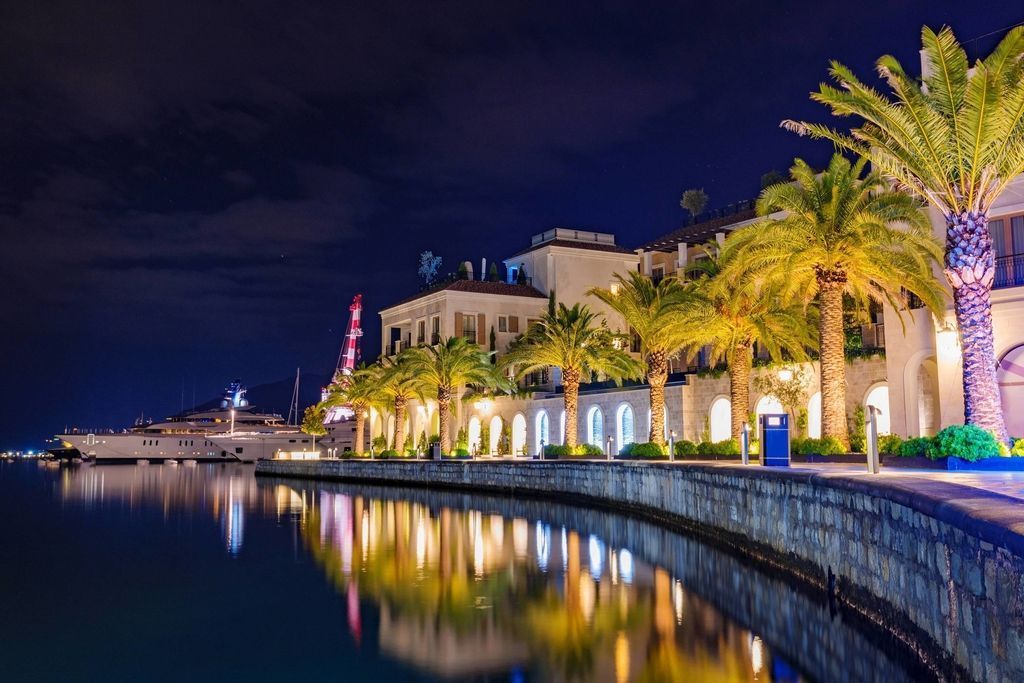 Apart from the beautiful scenery and abandoned palaces, there are several churches to visit in the Tivat area. In Gošići, the Church of Sv. Luka was built in 1776 on the foundation of a much older church from the 15th c. In Bogišići you will find the Church of the 13th century along with Sv. Srđa, Nikola and Dimitrije from the 19th c.

Although Tivat is a beautiful place, it was not always a must-see on the tourist map. However, with its many new additions, it is becoming more of a destination. In addition, the General Consul of the Socialist Federal Republic of Yugoslavia has taken an interest in bringing back old traditions and histories that liven up the town, including the yearly celebration for President Tito's birthday, on May 25th, known as Stafeta Mladosti—this is a celebration of youth and is now a must-see celebration at a one of a kind destination.